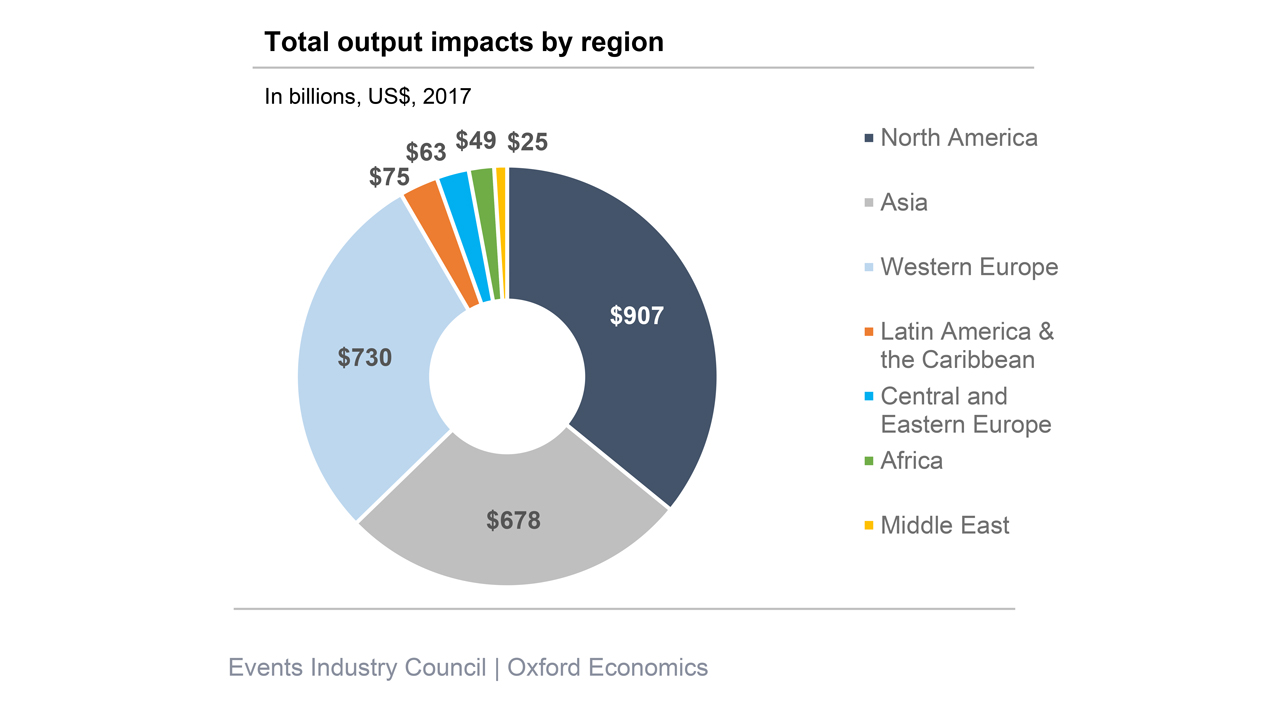 The final results of the first-ever worldwide study on the economic significance of face-to-face business events were issued today by the Events Industry Council (EIC), who commissioned the research. The Global Economic Significance of Business Events was conducted by Oxford Economics under a groundbreaking collaboration between the EIC and its partners, IMEX, Hilton, the MPI Foundation and the PCMA Education Foundation.

Expanding on the preliminary findings announced 17 October at IMEX in Las Vegas, the full report shows the depth and reach of the sector’s impact. Business events generated $621.4 billion (US) of direct GDP and contributed a total GDP impact (global gross domestic product) of $1.5 trillion. This ranks the sector as the 14th largest in the world, ahead of GDP’s of Australia, Spain, Mexico, Indonesia and Saudi Arabia.

“For the first time our industry is able to prove just how formidable an economic engine business events are globally. This study enables everyone involved in bringing people together for meaningful face-to-face interactions to show their true value and substantial contributions to growth and opportunity” said Cathy Breden, CMP, CAE, Chair of the Event Industry Council’s Research Committee.

The study found that globally business events generate more than 10.3 million jobs directly and effect a total of 25.9 million.

“The Global Economic Significance of Business Events is a vital tool for our industry to help both private and public sectors everywhere better understand how important business events are developing and sustaining thriving local, regional and national economies,” notes CEO of the Events Industry Council, Karen Kotowski, CMP, CAE. “We are grateful that leading organizations, Hilton, IMEX, the MPI Foundation, and the PCMA Education Foundation worked together to partner with EIC to support this monumental research.”

Fifty countries accounted for 96 percent of the overall $1.07 trillion (US) in direct spending. The United States led with $325 billion, with China, Germany, the United Kingdom, and Japan rounding out the top five. Asia was the largest region in terms of business event participants representing nearly one-third of 1.5 billion total worldwide. Western Europe ranked second, with almost thirty percent followed by North America with just under twenty-two percent of all attendees. The average spend per participant is $704 (US).

The full report can be accessed here:
http://www.eventscouncil.org/ResearchInfo/global-economic-significance-of-business-events